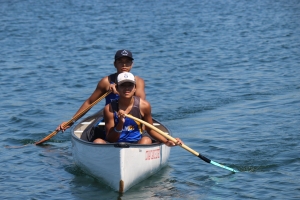 The 2019 BC Indigenous Provincial Canoe & Kayak Championships were hosted in partnership with Seabird Island Band and CanoeKayak BC September 21-22, 2019 in Agassiz, BC.

Indigenous youth paddlers (First Nations, Inuit, Métis) were invited to compete for the Provincial Championship titles at this event. The event also served as the athlete identification event to select athletes born 2001 to 2007 to form a “Team BC Development Squad” to train for and pursue participation in the 2020 North American Indigenous Games. The 2020 NAIG are scheduled for July 12-18, 2020 in Halifax, Nova Scotia.

A total of 65 athletes competed at the provincial championships in a strong field of competitors. To view the top placements and the news release click here.

Athletes selected to the Team BC Development Squad will have the opportunity to work towards being named to the final Team BC roster for NAIG in spring of 2020. Details on the Team BC selection process are provided in the Team BC (Canoe/Kayak) Athlete Selection Process document.

The Championships includes both canoe and kayak races: marathon canoe and sprint kayak races (as featured in the North American Indigenous Games).