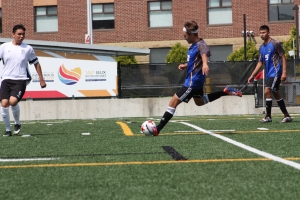 I·SPARC is please to present this provincial tournament for Indigenous youth (First Nations, Métis and Inuit) in partnership with the Gitanmaax Band and with the support of the Province of British Columbia. A total of 17 Regional Teams, including 300 athletes, coaches, and managers, will compete for the right to represent BC at the Halifax 2020 North American Indigenous Games (NAIG).

The 2019 BC Indigenous Provincial Soccer Championships will serve as the Team BC Selection Event whereby the winning teams of the 18U and 15U divisions will earn the right to represent BC at the Halifax 2020 NAIG. Accordingly, only eligible teams (“Regional Teams”) formed by the Regional Committees are permitted entry into the 18U and 15U divisions of the Provincial Championships (which qualify as the 19U and 16U, respectively, for the 2020 NAIG).

Teams in the 13U co-ed division compete for the Provincial Indigenous Championship title in an “open format” and medals will be awarded for Gold, Silver and Bronze. “Open” teams can be club teams or community teams comprised of Indigenous Youth (First Nations, Métis and Inuit). 13U division is NOT a NAIG qualifying division.