Eagle | Salmon | Raven | Frog | Light Meaning: This design embodies the diverse qualities and skillset of an ideal recipient. Represented in the circle are four animals. The eagle is for leadership and the pursuit of excellence. The salmon is for perseverance and connection to community. The raven is for creativity. The frog is for humility and the internal voice that drives them forward. The final element of the design is the circle or ring that weaves the figures together. It represents light, wisdom and the future. It represents the ever changing goals both on the field and in life. Stylistically this design gently stretches traditional expectations of coastal design. It has a contemporary feel but a traditional soul

About the Awards
The Province of British Columbia and the Indigenous Sport, Physical Activity & Recreation Council (I·SPARC) have collaborated to establish the Premier’s Awards for Indigenous Youth Excellence in Sport to celebrate the outstanding achievements of Indigenous youth athletes throughout the province.

The Premier’s Awards for Indigenous Youth Excellence in Sport recognize athletes who have achieved excellence in performance sport and are regarded for their leadership qualities both on and off the field of play.

Nominations will be accepted for youth athletes under 25 years of age (born in 1995 or later) who are competing in performance sport.  A total of 36 awards will be given out, six awards within each of I·SPARC’s regions: Northeast, Northwest, Interior, Fraser, Vancouver Coastal and Vancouver Island.  Recipients will be honoured at regional ceremonies held throughout the months of October and November 2019.

Nomination Requirements
To be eligible for the awards, an athlete must meet the following criteria:

Note: Past Provincial recipients of the Premier’s Awards for Indigenous Youth Excellence in Sport are not eligible to receive the award in subsequent years. Regional recipients remain eligible (until they are 25 years of age).

Nomination Process
Nomination forms can be filled out online. If you are unable to submit online, or cannot attach reference letters due to file size, please send by email to fgreekas@isparc.ca.

Only those competitive results/accomplishments achieved between September 1, 2018 and September 23, 2019 will be assessed. Nomination forms must be completed in full.

Applicants must not contact members of the selection committee regarding the status of their nomination. All requests for information should be directed to the Indigenous Sport, Physical Activity & Recreation Council (I·SPARC).

Successful Nominees
Successful nominees will be notified in September. Recipients will received an invitation to attend a formal regional ceremony held throughout the six regions in October and November 2019. Funding will be provided for each recipient to attend the Regional Awards ceremony.

Inquiries and eligibility questions should be directed to: 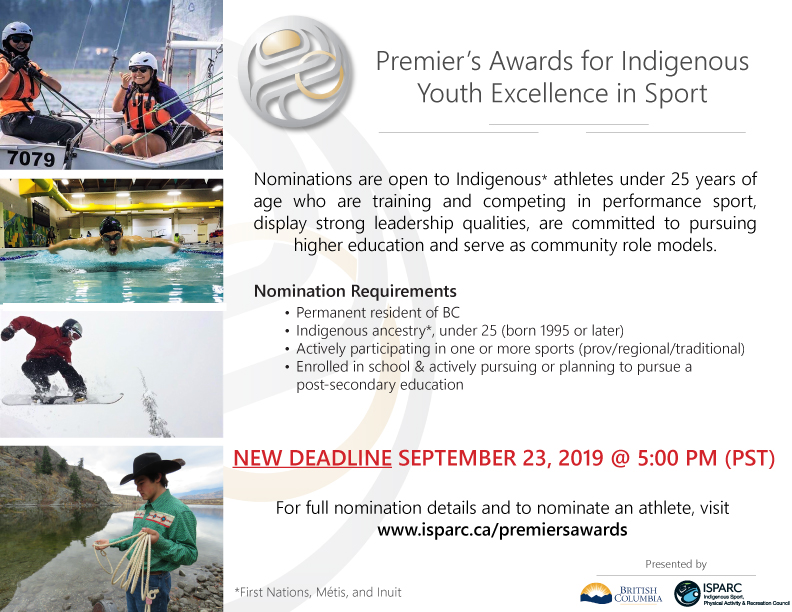